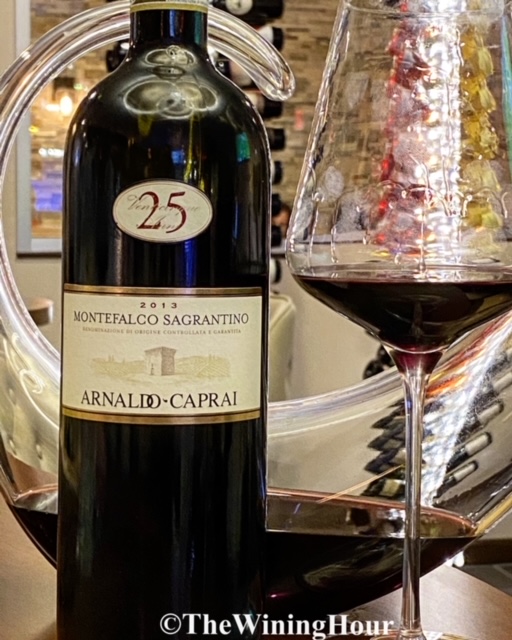 This month, I am featuring an Italian red wine from Arnaldo Caprai in Umbria.

Although Umbria is the fifth smallest region in Italy, and one of the least populated, it should not be underestimated. In fact, Umbria, which is located in south central Italy bordering Tuscany, Marche and Lazio, is known as il cuore verde d’Italia, or the “Green Heart of Italy.” It is referred to as Italy’s green heart due to its landlocked position, without a coastline or common border.  Nevertheless, Umbria, as the heart, moves us in so many ways. One of these ways is with its indigenous grapes, like Sagrantino.

Sagrantino, with history dating back to the 16th century, happens to be Umbria’s most distinctive and signature red grape. Sagrantino is a thick-skinned grape that is late-ripening and cold-resistant. Due to its high levels of polyphenols, Sagrantino is very tannic. However, most producers do a good job with aging the wines in oak to counter the tannins. As specified by the Montefalco Consorzio Tutela Vini, Montefalco Sagrantino DOCG wines must be aged for a minimum of 37 months, with a minimum of 12 months in oak and at least four months in the bottle prior to release. Typical flavors include blackberry and plum, with bright acidity. The name of the Sagrantino grape, denotes something sacred (sacro/sagra) or religious, and this grape is certainly sacred and important to the Umbrian region.

Since 1971, Arnaldo Caprai has been a well-known and very respected leader in the production and recovery of Sagrantino di Montefalco. Arnaldo Caprai Viticoltore has spent the last 18 years in research and experimentation “towards a deeper knowledge of soil and climate conditions, recovery and increase of value of Sagrantino’s genetic heritage, optimization of traditional training systems.” Arnaldo Caprai believes in and practices environmental, economic and social sustainability in the production process. In accordance with their New Green Revolution, they have developed an Environmental Management System (EMS), they continue to monitor carbon dioxide emissions and they continue to enhance clarity and consistency for their carbon footprint. The winery has received many awards in recognition of their efforts. Today, the Arnaldo Caprai estate encompasss 370 acres surrounding the villages of Montefalco, Gualdo Cattaneo and Bevagna. They not only produce wines under the Montefalco Sagrantino DOCG, but also the Montefalco DOC and Grechetto de Colli Martani DOC.

So I must confess, given the fact that Sagrantino is known for its strong character and high tannic levels, I have not always been its biggest fan. Perhaps I have been tasting the wrong ones, or my palate matured, or…I hit the jackpot with this one.

100% Sagrantino, aged for 24 months in French oak barrique and minimum 6 months aging in the bottle. This wine is a dark ruby in color with complex black fruit aromas (blackberry, black cherry, black plum). The palate aligns with earthy notes, dark fruit, spice, chocolate and leather. Full bodied, balanced and intense with complex tannins and lively acidity. 14.5% ABV. Arnaldo Caprai Sagrantino di Montefalco 25 Anni can age for another 10 years or more and it will still be fabulous.

This wine really surprised me and made it clear that I just need to taste even more wines!

What are your thoughts on this one?

Check out my other posts about Umbria and Umbrian wine, food and culture:

Another Taste of Umbria with Hedone Bianco

The Road to Orange Wine in Umbria 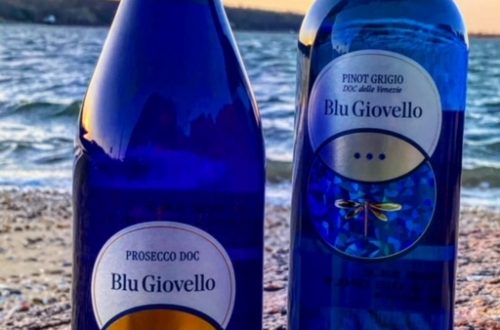 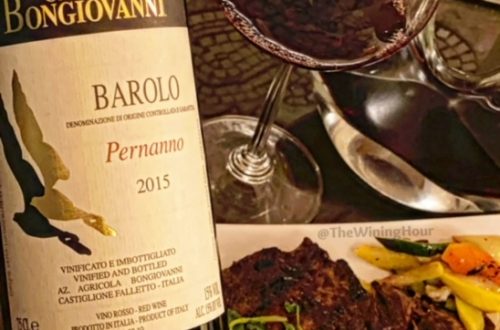