Exploring the Jewish Ghettos of Rome 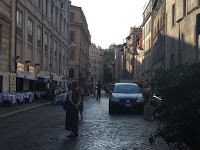 As a frequent visitor of Rome and Italy in general, it was both very interesting and moving to explore the area of Rome known as Ghetto di Roma. Ghetto di Roma is located within the heart of the Porto d’Ottavia, just south of the Campo di Fiori part of Rome. Rome has a Jewish ghetto? Who new? Well, not only has it been around since 1555, but it is still a thriving Jewish community and place of interest frequented by many tourists today.

Due to Church mandates in 1555, all Jews were required to live in this ghetto section of Rome. It was located behind walls and was locked at night in an effort to keep the Jews sectioned off. This area was considered undesirable due to the frequent flooding from the nearby Tiber river. Here is where the Jews lived under very inhumane conditions. There was overwhelming poverty and overcrowding in the ghetto, which lead to poor hygienic conditions and disease. There were many other restrictions invoked upon them. In terms of employment, Jews were only allowed to work unskilled jobs, such as in second-hand shops, pawnbrokers and fish mongers. Jews were not allowed to own property, including in the ghetto where they lived. Instead, they were required to pay taxes in order to continue living there each year.  As you walk through the ghetto, you can see remnants everywhere, which serve as a stark reminder of the pain and suffering that the Jews had to endure.   In fact, embedded in most of the doorways, I could see the small, square bronze plaque bearing the names and dates of those who died during the Holocaust. 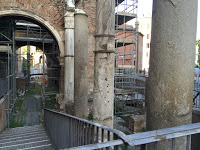 The Jews were required to live in the Ghetto di Roma until the incorporation of Italy, and when the ghetto was later abolished in 1882. Nevertheless, this exclusion, or seclusion allowed the Jews to carry on their religious observances without disturbance. Additionally, the Jews in and from this area speak their own dialect-Guideo Romanesco, which includes many Romanized Hebrew words. It was fascinating to speak to passersby in Italian and in the little Hebrew I know, and to hear them respond to both. 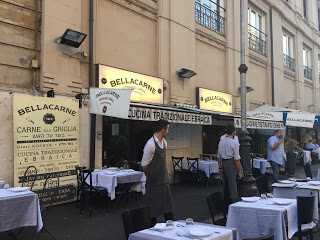 Ghetto di Roma was initially referred to as Serraglio degli Ebrei or Enclosure of the Hebrews (Jews). Ghetto is the more modern term to refer to the Jewish Quarters. Although there were other Italian ghettos, such as the ones in Venice and Florence, Ghetto di Roma was one of the last remaining ghettos in Europe. Today, Ghetto di Roma is home to the Great Synagogue of Rome, The Jewish Museum of Rome,  and many other monuments of historical significance.  My visit there was very informative and helped me to appreciate the rich history that comes with that territory in Rome.  Should you travel to Rome, Ghetto di Roma should not to be missed.

Here are some of my recommendations: 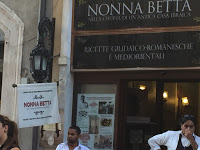 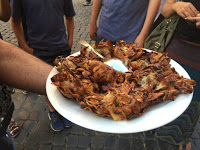 Wining & Dining Hour:
Nonna Betta -Via del Portico D’Ottavia, 16.  They are famous for their fried artichokes, which have a history of their own.  Anthony Bourdain seems to endorse this restaurant as well.
Ba’ Ghetto – Via del Portico d’Ottavia 57. Find Jewish, Roman and Middle Eastern Dishes here. 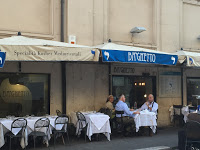 Pasticceria Boccione -Via del Portico D’Ottavia, 1. They have more pastries than you can eat, including the delicious challah bread, of course.
All Kosher.

Have you been to Ghetto di Roma?  What were your thoughts? 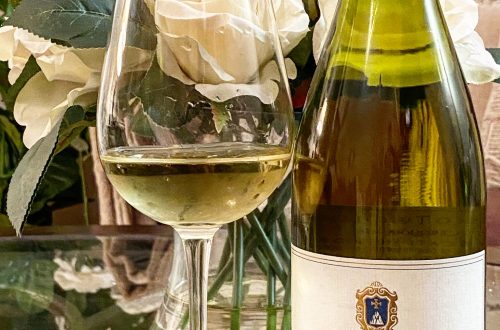 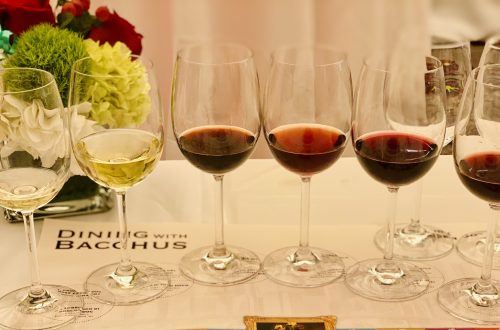