Beach Lover? Consider Calabria for Your Next Vacation

Abundant in sun, sand and sea, Calabria is located at the southernmost tip of Italy.  In fact, it is considered the toe of of the Italian boot, with Basilicata to the north and Sicily to the south.  This is an amazing location for food, wine, culture and relaxation.  Calabria has it all: mountains, national parks, Medieval villages and seaside towns that can be enjoyed all year long. Lovers of all things aquatic will be in their element, as Calabria is situated in between the Ionian Sea to the west and the Tyrrhenian Sea to the east.  There are many water sports on either coast, from diving and swimming to snorkling and sailing and much more. One can take their pick, as there is no shortage of pristine beaches in this region.  It is not wonder, then, that Calabria is referred to as the Caribbean of Europe. Here are some of its highlights:

While the Ionian coast may be a little less crowded and less popular, than the other coast, it does not disappoint. There are many villages of historical significance located here, such as the medieval villages of Badolato, Gerace, and Stilo, which is known for its 10th century Byzantine church, La Cattolica. Each of these medieval villages is well preserved and has much to offer in the way of sightseeing, architecture and history. Capo Rizzuto is a protected beach area with special marine life and Camina, in the town of Catanzaro is another noteworthy beach. Nearby, there are Siderno and Soverato, two modern cities along this coast that are frequented by tourists. Moreover, along the Ionian sea is where the communes of Cirò and Cirò Marina are located.  Cirò is home to Calabria’s most notable wine of the same name. So this coast is for the beach lover and the wine lover, as they can explore both the beaches and the vineyards.

The white sand beaches of Tropea and Capo Vaticano are the two most popular beach resorts along this coast.  Tropea is said to be one of the cleanest beaches with quaint villages and historical sites that rests on a coastline called “Coast of the Gods” by the ancient Greeks. Capo Vaticano is one of Italy’s most beautiful beaches, chock full of tropical fish, fauna and flora, which make it ideal for snorkeling.  Also along the “Coast of the Gods” is Pizzo, which is known for tartufo di Pizzo, not mushrooms, but the delicious gelato treat make with chocolate and hazelnut ice cream. There’s Diamante, another fishing town referred to as the ”Tyrrhenian Pearl” and Praia A Mare, with it’s black volcanic sand beaches. We would be remiss if we did not mention Scilla, the picturesque fishing village most noted for the sea monster in Homer’s The Odyssey and Palmi on the “Costa Viola” or “Violet Coast” named for the deep purple hues of its waters.  Another beach of note along the Tyrrhenian coast is Scalea.

Clearly, Calabria is Europe’s version of the Caribbean, as the aforementioned was only a highlight. Anyone who loves the beach, sand and life by the sea would find pleasure in this region of Italy.  The food, wine and culture are the icing on the cake.

The sea plays a huge role in the food and culture of Calabria.  Much of their cuisine is characterized by lamb and pork dishes, ciambotta, or eggplant and other vegetables, olives, olive oil, dried tomatoes, peperoncino, seafood, swordfish and other cured fish, such as baccala or dried codfish. A typical Calabrian dish is caviale dei poveri or poor people’s caviar, made with herring and hot chili peppers. Breads, cheese, cured meats and pastas are all staples of Calabrese cuisine.  In terms of formaggio, Caciocavallo Silano (PDO) is their star, while Soppressata, Capocollo, Pancetta and Salsiccia di Calabria all have PDO status.  Nduja, a soft sausage made with local chilli peppers, is a favorite. Calabria produces some of Italy’s best olive oil, only second to Puglia.

The vineyards of Calabria also produce very good wines.  Calabria has 12 DOC titles, but only 4% of the wine produced holds that designation. Cirò Rosso Riserva is one of them.  Cirò is not only a commune in Calabria, but also its flagship wine. Cirò is produced as rosso, rosato and bianco and is considered one of the oldest named wines in the world.  Over 90% of the wine produced in Calabria is red.  Ciro Rosso is made from a minimum of 80% Gaglioppo grapes, while the remaining 20% is from other indigenous grapes. Greco Bianco and Trebbiano Toscano are used for Cirò Bianco and Cirò Rosato.

All this talk of wine persuaded us to have a glass! 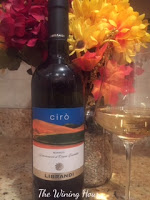 Our first experience with Cirò involved Cirò Rosso.  This time, we decided to explore Cirò as a white wine.  We tasted Librandi Cirò Bianco 2013.  Made from 100% Greco Bianco grapes, this was pale yellow in appearance and had aromas of pear, apples and melon.  It was crisp on the palate with a dry minerality, fruity green apples. and bursts of citrus.  Cirò Bianco is a good, refreshing summer wine.

We paired this Cirò with fresh, sauteed clams over linguini-a favorite. Librandi Cirò Bianco would function well on its own as an aperitif, or with fish or crustaceans. As a lover of seafood, this was right up my alley! 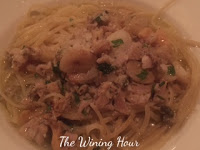 Read about our experience with Cirò Rosso and watch our interview with Luigi, “The Handyman” from Calabria

Have you tasted wines from Calabria?  Now that we have tasted both white and red Cirò, we understand why Cirò is wine of note in this southern Italian region and are more eager to visit this town.

Join us on Twitter this Saturday @ 11am EST at #ItalianFWT to talk about the food, wine and travel to Calabria.  We’d love to hear your experiences or just come to learn more about this southern region in Italy.   Here are fellow bloggers sharing their insight into Calabria:

*Special thanks to Emanuele Giannini of Studio EG for sharing your photos of Calabria!
Visit Studio EG for more stunning photos and videos. 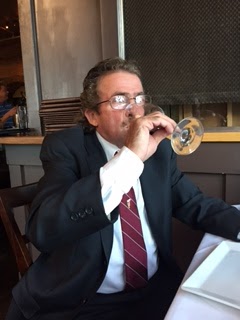